Whew, I've been gone for a long time. Since the last post, I've flown to 4 shows, and driven 4000 miles. I'd fully intended to blog along the road trip, but had such a nasty bout of flu that only really necessary stuff was accomplished. We got back home last Thursday evening, but had several upsets that I just didn't want to write about. C's friend has been evicted and all the pets are OK, and that's all I have to say about it. Now, on to Good Things.....We got the first snow last night. Here's the backyard this afternoon. 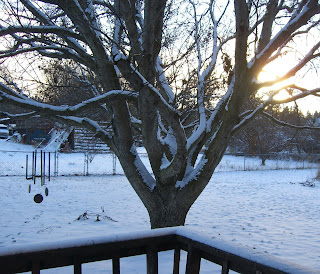 The pic was taken at 3pm.
We bought a cord of Tamarack to go with the misc. soft wood the previous owner left, and I'm perfecting the fire-building ability. "Grunt, Fire good". Got the house up to a balmy 67 degrees yesterday evening. C has put on his electrician hat to fix the thermosat. It's been broken since we moved here last April, but we're finally motivated to get the heat on in the house. It was a rather brisk 50 degrees in the living room when I got up this morning. Yikes!