I guess it's time to bring an end to our sad little tale of injustice and conspiracy inside the Nevada Highway Patrol. Briefly, Mary Kay and I were rear-ended in a hit-and-run accident on our way to the Las Vegas show a couple of months ago. We called the Nevada Highway Patrol, had the car towed, and completed our part of the report, including the license number. Meanwhile, another officer further down the road stopped by and told us he'd had two witnesses stop him with information on our accident, and from both, he read the same license number and car description from his notes. He also mentioned a call to 911. The trooper told me he'd get right on the case (hit-and-run IS a felony!), and would call me in a couple of days, and to expect the completed accident report in 10 days. Here we are, riding to the venue in the back of the NHP car, absolutely clueless on how badly things are going to get. Well, no call from the trooper, and he doesn't return my calls. Days and weeks pass, and there's no completed accident report. I talk to the trooper's sargent, who says he'll get right back to me, but then also never returns my calls. Finally, more than 6 weeks after the accident, the trooper finally looks at the car that at least 3 of us have identified. There's evidence of front-end damage and repair, but the owner says that this is from a previous un-reported accident....and those two eye-witness reports? They're gone. Now the trooper claims that the witnesses just said "there's an accident back there", and kept on going. And the dispatch call has disappeared. My cousin, who's an accident lawyer, concludes that we had the bad luck to be hit by a girlfriend or relative of the Highway Patrol. He was only surprised that it happened at a State level. Apparently this type of coverup is more common at the City level. Bottom line -- my word against the NHP, so guess who lost. The moral of the story is that just because they wear a uniform, have shiny shoes, and call you "ma'am" doesn't mean they can be trusted. I doubt I'll be contribuing to any future Policemens' Benefits.
No comments:

Batman: "I believe it is a good day to chew a foam pillow. Do you think anyone will notice?" 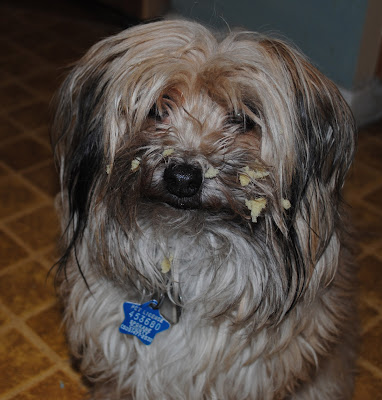 Back from Mesquite. Great to see friends after the holiday break, but on Friday I had a feeling that the show was going to be good, which unfortunately turned out to be gas. LOL ...And now after 4 days of trimming and packaging orders, I'm back to having fun with projects. Here's some of what I started during the holiday, and sometimes completed.... 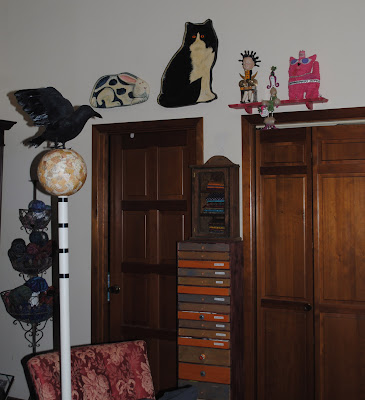 The styrofoam balls have their first coat, and are successfully stuck on the bed posts. They need something else, but I'm going to live with then for now, and wait for an inspiration. I tried striping the posts with electrical tape, but it's not too interesting, so I might try black polka dots next. The wierd thing behind the crow is a bunch of yarn. 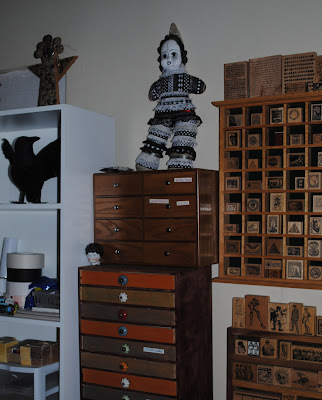 I hung most of my stamp shelves. The doll is almost finished. It was harder that I expected to draw on the raised surfaces of the doll's face, so I might gesso it again and start over. The Ikea drawer thingies are painted, and one has new drawer pulls.
Later tonight it's back to the cards project.
No comments:

I'm back from Grapevine (Dallas), the first show of the year. As usual, it was not a clean start out of the shoot. The Mystery of the Whimsical Inventory continues to hang like an albatross around my neck. Just WHAT was I thinking as I packed? Or had the last functioning braincell decided to take a holiday? Fortunately, I'm returning the Dallas area for the Mesquite show next weekend, so I'm regarding it as the Redemption Round to get my product to the venue.
Grapevine did have it's light moments....several of the Marcos' folks and I all needed to be at the airport PDQ, and Mary Kay volunteered to take us all in her 4-seater van, so off we went with 2 booths of boxes, and 4 peoples' luggage jammed in the back, and Marco's Karen wedged on the floor between the seats. Pics were taken, and I'll post if anyone ever sends me one.
Other exciting news is that my BFF Melinda in Spokane saw my journals, and has graciously invited me to share her display space at a couple of local galleries, so I'm making my journal pages into cards. Here's one page before it's put on the card... 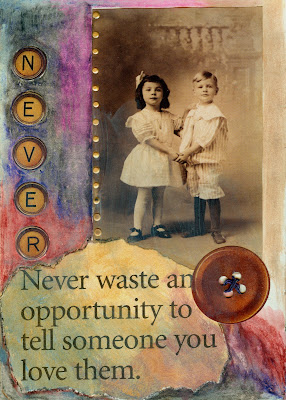 It's not a card yet because I, of course, made it the wrong size, and need to re-do them next week.
I'm truly honored and flabbergasted that she would be so generous. I'm a very lucky person.
2 comments: