I'm back from the Riverside show. Got delayed in Portland -- flights to Spokane were canceled because of weather. They tried a few flights until a Southwest plane slid off the end of the runway. At that point, everyone gave up and closed the airport. Return flight the following day was uneventful, but the car had 15" of snow, so I had to borrow a snow shovel from the lot attendant to dig out the car. I really need to add some cold-weather items to the car -- boots, gloves, shovel.

Here's a pic of a 4' icicle hanging at the back of the house. Had to knock it off after I took the picture so the weight wouldn't pull down the gutter. Wish the pic was better. I'm not getting the quality I want, but a new camera is not in my near future. 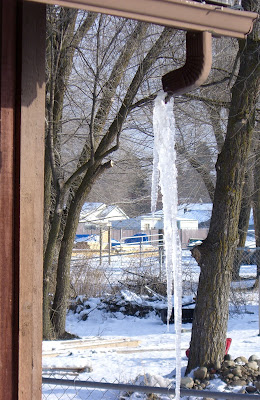 Off to Costco in the morning to get better tires.

Life can't get much better than a nap in the sun. 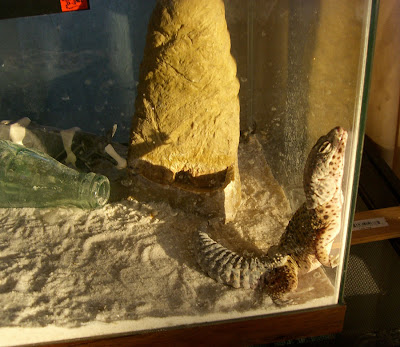 Well, another two weeks have passed, and I'm back in an airport again. I'm on my way to Dallas for the Grapvine show, and thus ends the seven weeks of down-time. Back in November I had such good intentions for planned accomplishments -- Gallery for the website, a bazillion new designs, paint bedroom, prune trees, and yes, the Wood Pile. But those good intentions are now just a good, albeit impotent memory. Like all the rest, the Wood Pile still looms in front of me. It's still covered with snow -- Not the SAME snow. Nope, we had one day above 32F when it rained, and then the temp dropped again so the wood all froze together in a big lump. I tried kicking a few pieces loose but really can't recommend this procedure.
At least the Family Visit went well. We cranked the heat up to a blistering 65F, rolled my mother up in a blanket and plopped her on a heating pad, so she was content. Dakota developed a cough, and God forbid I return him sick to his father, so outdoor activities had to be curtailed, but indoor events were a success. It was pretty much a Martha Stewart week. I don't remember when I've cooked this many meals, washed this many dishes, or tried to be such a gosh-danged homemaker. We even made Christmas ornaments and dog treats. The Great Meatloaf Cookoff resulted in a four-way tie (In true Democratic Spirit, we each voted for our own), but all agreed that we'd been suffiently "meatloafed" that it won't be on the menu again for a long time. 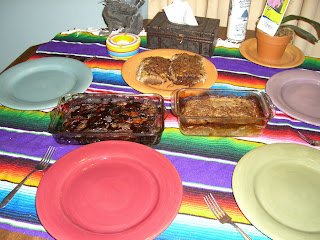 Don't know why, but I can't get anymore pics to load, so am quitting in disgust, and will try again later.