I'm having love/hate relationship with my iPhone. Most functions work, but the phone part (hey, isn't that the main function of the device??) locks up and won't run without a reset, and the volume keeps going to "vibrate only" so I always miss calls. And now it has deleted most of my photos, so I've uploaded a old pic from the Netherlands Keukenhof (Tulip Park) we visited last April after the show in Zeist. The gift shop has an exhibit of hats, including this one that wouldn't inconspicuously slip into my backpack. 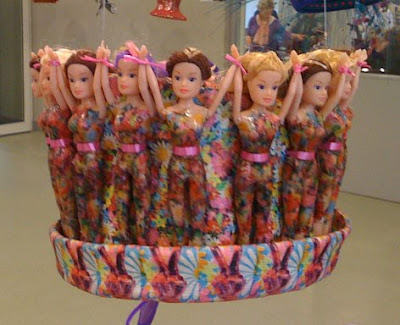 I'm at a show Albuquerque Fairgrounds this weekend. For everyone else that needs an immediate "convention fix", check out the Virtual Convention at www.rubberstampchat.net. I don't remember how many vendors are participating, but it's a LOT. It's easy to join if you're not a member. Then click on the RSC Virtual Convention link to see a list each booth's convention special. It'll run until Monday night. L: "I have no passport"
MK: "And I have no ticket"
It's frigging 4am in Manchester England, we've already been up for 20 hours, and the "hard part" of the journey home is still ahead of us.
And on a positive note...we DID get home, and I'm happy to say that the blog is back!
I'm headed for Albuquerque tomorrow. There's a show this weekend, and I'm teaching a class Thursday. I'll post some class samples when I get back.
1 comment: