Luggage finally showed up today. It was a stressful week waiting for the illusive luggage. I could deal with losing many things, but the thought of starting over on sample boards could have pushed me over the edge.
We made a trip down to Oregon this week to do a GPS demo. It was basically a long drive past nothing but wheat fields, so have no interesting pics. The demo went well, and may generate a sale, but losing the production time has put us behind on rubber pressing, so now it's back to the vulcanizing salt mine :-( I'm headed for the Art Unraveled show in Phoenix next weekend. Hope to see some of you there.
My Bush Economy Incentive check finally arrived. I guess I can get a tank of gas with it :-(
I'm still looking for someone to run my booth at Westminister, MA. Beat the last-minute rush and call me NOW!!

Good News - Website is FINALLY functioning again, and all the new stuff is uploaded. YAYYYYY! It's Do the Dance of Joy Time.
Bad News - Spend 7 hours in the Dallas airport yesterday trying to get home from the Grapevine show. Finally they put me on Delta flights through Salt Lake City, so I was in a middle coach seat, but frankly, they could have catapulted me off the DFW roof. I was that eager to head home......and of course, the luggage was lost. Again. Sigh.
I'm still looking for someone to run my booth in Westminster, MA. Make friends, earn valuable prizes! Not really, but you will make some cold hard cash and get lots of rubber.

HELP! I'm desperately looking for someone to run my booth at the Westminister, MA show. It's the last Saturday and Sunday of September. If you live in that area, and want to earn money and rubber, please give me a call.

I'm sitting in the Seattle airport, on my way to SSAT's Pittsburg show. It's my first road trip in a month, and I'm really out of practice. Backpack is too heavy, I dressed in the dark, and am wearing my old flipflops, but at least I don't *think* I've forgotten anything vital.
We had bizarro weather yesterday. Steady winds at 40 MPH, with gusts to 60MPH. It was pretty kewl -- howling wind sounds and BIG tree-swaying -- but there were a number of fires caused by downed powerlines. One was up in the foothills behind our house. It was quite large -- last I heard it burned 1200 acres and 5 houses. We're about a mile away from the evacuation area, but upwind, so there was never any danger to us, but it was impressive. We drove to the site to get some pics for the blog, but I'd taken the SD card out of my camera, so once again, have nothing to show :-(
Website is STILL in transition to a new server, so the Schedule page and New images still don't load. I don't know if I should blame Mindspring or Dotster, so i think I'll just hate, hate, HATE them BOTH. Some of the new stuff will be in Pittsburg this weekend, and even more will be at Grapevine next weekend. I'm always so danged excited to have new images, and am throughly bummed that I can't get them loaded.
Hope to see some of you tomorrow! 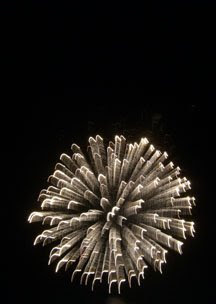 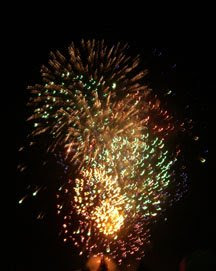 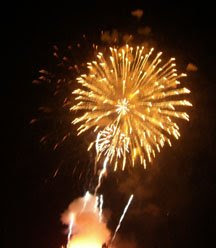 We dressed Batman in his red/white/blue shirt, and took him and Cosmos downtown for the fireworks show in the park, but all dogs were 86'ed from the festival. We all hung out at a bar across the street -- still had a great view of the sky, beer, and no kids. Sounds like a win-win situation to me LOL.

Part of my website is down. I need to get caught up on blogging, but first want to thank those of you who wrote to tell me that the new images are broken, and the Convention Schedule page has disappeared. I've known about it, and am trying to get it fixed. Spend two wasted days with outsourced tech support getting useless and incorrect information. Finally spoke with someone last night that has clue, and they have me pointed in the right direction. Still, I expect it will be another 48 hours until I can access the site again.
My apologies. I'll post here when the new images are up.