It was yet another show this past weekend, but it was right here in Spokane. Crieghton was also around to help with the booth, so it was quite an easy and short show -- No travel on Friday and Monday, AND home in the evenings :-)) I'm really enjoying this week at home. Yesterday I made a dozen altered journals from old children's books (they'll be going to Art & Soul in Portland on Friday), and today I finished up three felted bowls. I bought a humongous roll-top desk on Craig's list, 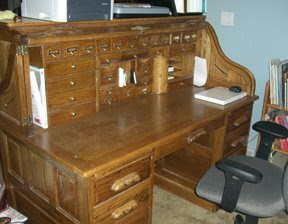 so everything from the old desk is in the middle of the living room, but I'm slowly cleaning the debris field that's accumulated in the last two hectic months.
I found this Barbie head in a Goodwill store. I already have several and wasn't planning to buy any more, but none of the others have rotating hands, so she had to, of course, come home with me. 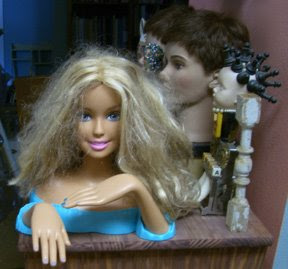 And here she is after Step One. 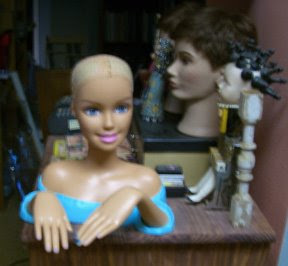 OK, after swearing off anymore Barbie heads, I also bought a big plastic My Little Pony head, but I'll save it for another post.

I'm back home from the Rhinebeck show. I took a great pic while I was there, but of course, I can't find the SC card. I'm sure it will surface on the landfill eventually. In the meantime, here's Niagra Falls. I had a late flight after the Hamburg show a few weeks ago, so made a quick trip to the Falls just in case I never get back. There was only time for one tour, so I did the Cave of the Winds. The "cave" was just a short tunnel at the bottom of an elevator that dumped us out at the base of the American Falls (not the big horseshoe-ride-the-barrel-over falls). Everyone got a yellow condom to wear (one size fits most). 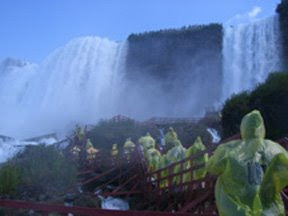 There was no wind in the cave, but the noise and wind at the bottom of the Falls was impressive. It really did get very wet and windy by the time we got up under the Falls, and everything outside of the condom was soaked. I was headed directly to the airport afterwards, so was glad to have it. I brought mine home for the next time we want to play Dress Up with the medical skeleton. We got spiffy sandals, too, but I pronate so badly that only my toes were in the sandals, so I donated them to a bin routed to some developing shoeless country of non-pronaters. 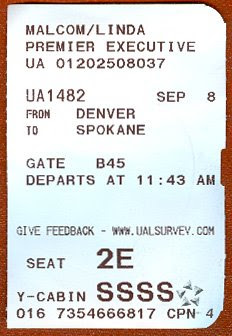 This pretty much set the tone for the rest of the trip, but at least I got home.
Packing today for Mekka in Germany. Will be back here next week.

Welcome back, dear readers. It's been a long time since my last rant, and I think this morning is just about the right time. I'm sitting on the floor of the Greenville Spartenburg airport at 5:am, and it's already been a Long Day. I've been on the road for 4 weeks and still have two more trips, so admittedly, I just might be a tad cranky. I was ticketed for a flight home late this afternoon, but I'm eager to get there and pack for Germany, so I called the Premier Executive "special" phone number (the one dedicated to their more "valued customers" (yeah, right). Well, they tell me that there are multiple flights connecting to Spokane, starting at 6am, and there are many seats available, so head on down. I'll be brief about the alarm that didnpt ring, so Mary Kay and I were out the door in 15 minutes WITH MAKEUP, and then how we got lost on the way to the airport, but still got there in time. Sounds pretty good, right? I haven't yet gotte all the trying details of MK's jaunt through security Xrayed four times. (like she'll cleverly and subversally sneak dangerous liquids in between each screening). My first big bump in the road was that I wanted a three-et trip, when the original ticket was for a two-leg trip. The ticket people said that the Prem Exec people had to give authorization, and the Prem Exec people said that the airport ticket people had to do this. What a quandry!! Two increasingly hostile phone calls later, they finally give me my standby boarding tickets, but they have the debilatating "SSSS". Those in the know will recognize this -- I'm immediately funneled into the "in-depth" security check. I haven't ben so throughly groped in years!...and EVERYTHING in my carry-ons had to be removed, examined, and screened. Of course, by this time, the plane was gone.
YIKES! Gate change. gotta run.