Well, I'm back in an airport, again This time in Chicago, headed for Point Sunlight, England for a stamp show. Seems that the airport is the only place I'm captive and take the time to post...unfortunately I don't have an SD card slot or reader, so can never post pics....and then when I get home, I either don't get around to uploading, or just forget about it entirely, i.e., my bluegrass festival pics.
This week has been another whirlwind. C, the Batman and I drove to the Portland Art & Show last Saturday night. We hauled the Scotty along, and spent both nights in a campground along the Columbia River about 30 miles east of Portland -- much more fun than yet another over-priced hotel. The show was surprisingly good for us, although the low expenses made the difference. It was NOT as good as last year, and I think many of the vendors did not do as well as we did. I'd been very concerned as the co-ordinator had followed the current trend -- it had been a very good show with 30 vendors, so she upped it to 60 this year.
I signed up for a knitting class through the Spokane Parks & Rec. I have no idea how many weeks it runs. I figure someone will make some closing statements some week, or I'll just show up and the place wil be dark. I'm making a felted tote, and have a lovely pic of it that I took right here at the airport...but that was before I realized I had no way to get it on the PC. sigh.
They have a new intriguing toilet at the Almiralty Club. The "rotating condom" seat covers have facinated many of us for years, but over time, they have become mundane. Now, thanks to modern technology, something else to occupy our hours between flights. These toilets, swear to GOD, have an LED display that counts down to the Flush. How kewl is that? I have pics of it, but of, course, can't upload. When and if I ever think of it at home remains to be seen.
I'll bet back from England late Sunday night, then turn right around and fly to Salt Lake City for a GPS to-do, then back Wednesday night and leave for Chatanooga Friday morning, so don't know when I'll get back here.
Hugs,
Linda
No comments:

Heidi sent me the pic from Mekka, so everyone can see some of my dearest friends from Germany, Heidi, her husband Friedel, and Doris. 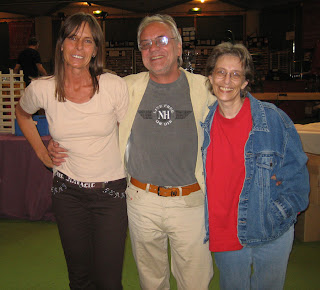 Right off the bat, I must say that we're missing two others -- Andrea and Margaret. They couldn't make it to Mekka this year, and were sorely missed. Mark Kay and I will be looking for you next year, guys!! MK and I have been going to Mekka for at least 8 years, and we've got most of the procedure worked out, but 8 years ago it was a completely different story...fortunately, we were blessed with a group of ladies who showed up to help us, and over the years they have all come to be close friends that we cherish. They've helped with translation, brought us water, sodas and innumerable goodies, run erands when we forgot something, haul out butts around town, and even had my booth set up by the time I arrived. They've turned a Work Weekend into fun Girls' Weekend that we always anticipate with delight.
This year, Doris gifted me with a bundle of yarns. She dyed and spun the wool herself, and even knitted these socks. 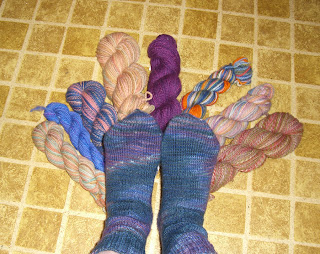 Heidi brought us several bottles of wine, but it has already been turned into Linda cells. LOL
I feel SO special :-)