Stamp Show and classes in Albuquerque and Santa Fe

Hello Lost Coasters in the Albuquerque, NM area!
I'm going to be at the Albuquerque Rubber Stamp Show next weekend, March 8th and 9th.  It's at the fairground.  I'm also holding a all-day trunk show and Creative Drawing class the following Monday, March 10th, at the China Phoenix 2 store on 4th Street in Albuquerque.  I just taught the class at Art N Soul in Lacey, Wa, and here's a link to the wonderful creations those students made.
http://bellacartaatartnsoul.blogspot.com/
-Linda
And the incredible stamper and artist, MaryJo McGraw will be teaching a class at Guadalupe's in Santa Fe on Thursday, March 6th.
Here's a link to her blog with information.
http://bellacartaatartnsoul.blogspot.com/
Have a fun day and learn new art skills!
No comments:

Hi Coasties!!
Hope you are all having a great weekend!!  I found some time to play with some stamps and inks this morning!  --So fun---  I made two projects using one of the six stamps from the Cameo Set and the Asmat Bones Border Stamp  from Lost Coast Design.


I used a mono printing Plate to make the background on card #1. 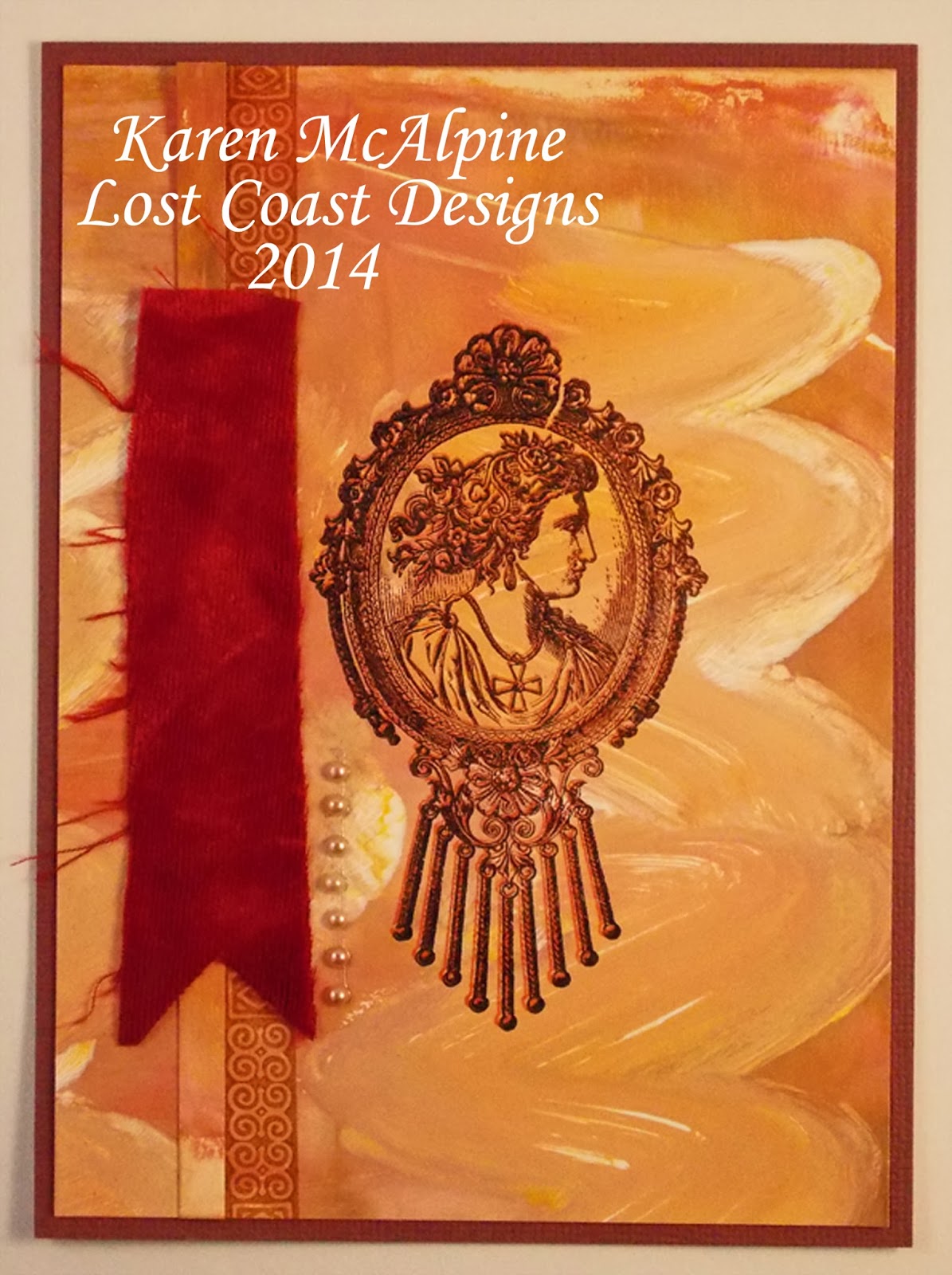 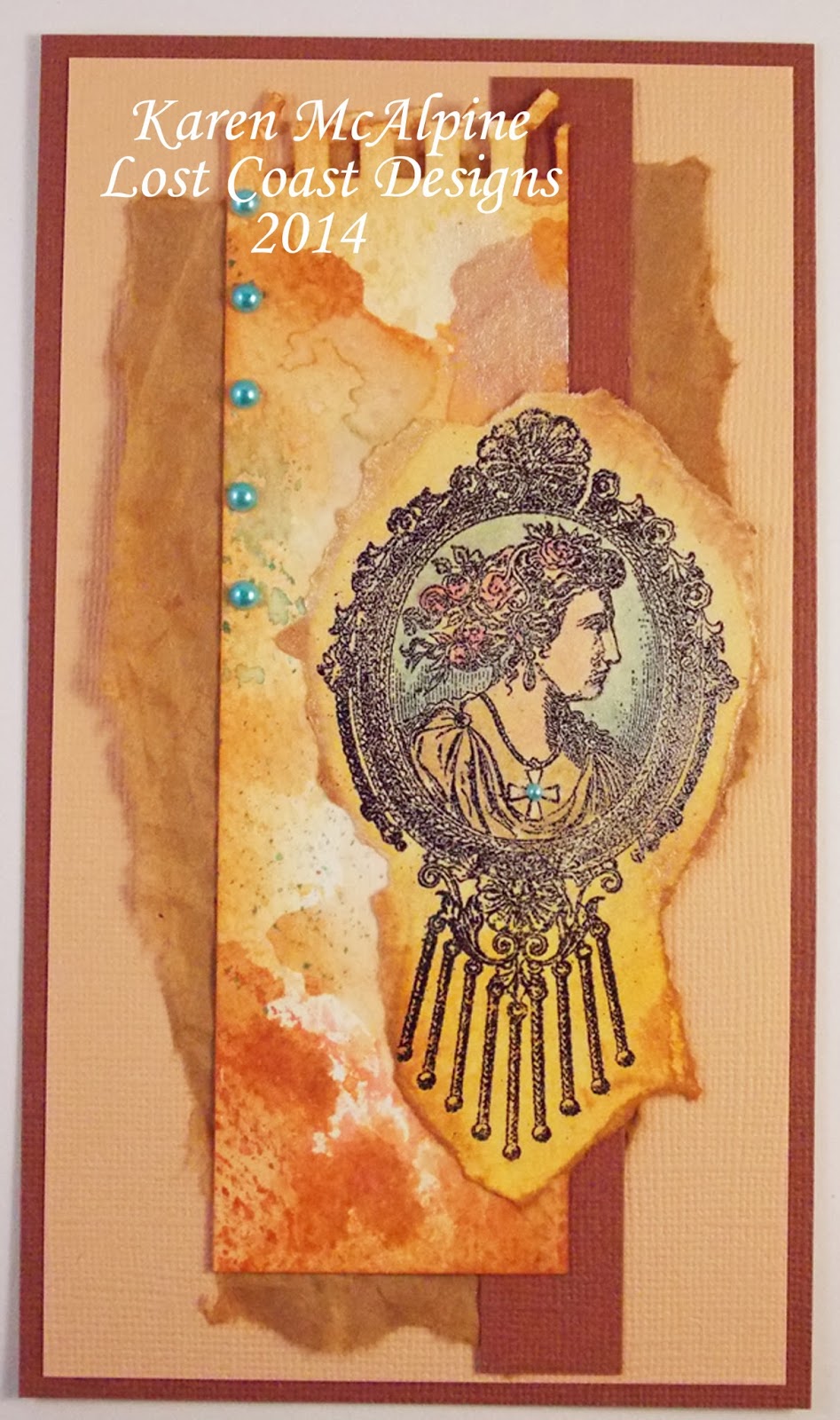 From a materials lists, instructions, and more pics, check out the full post on my blog, Dreaming and Creating.  Have a fabulous day!!!
Karen McAlpine
No comments:

Here Bibiana...
With much respect and a profound sense of awareness...
I present to you this card that I made using the fabulous Stamps from "Lost Coast Designs" to commemorate Black History Month ( AKA National African American History month) ! 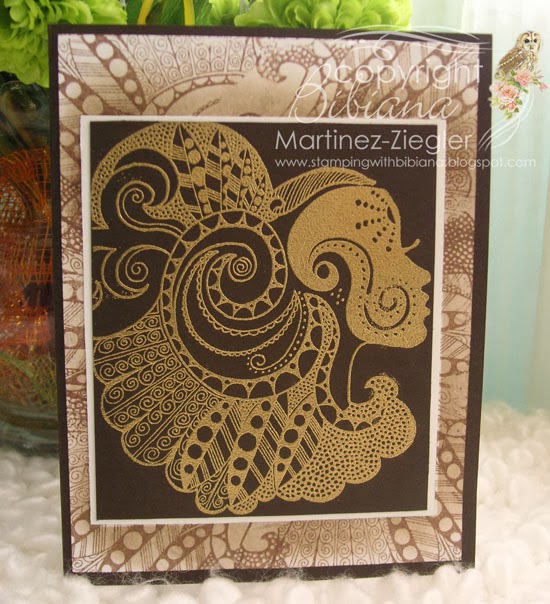 African American History dates back to the colonial period when Africans were brought to the American colonies as slaves. And is until the 20th century when Black history was pushed into the public consciousness and the month of February was officially declared as the month to recall and show respect to the achievements by black Americans and to the role of African American in US  history. This celebration of black history is observed in the USA and in Canada and in the United Kingdom in the month of October. 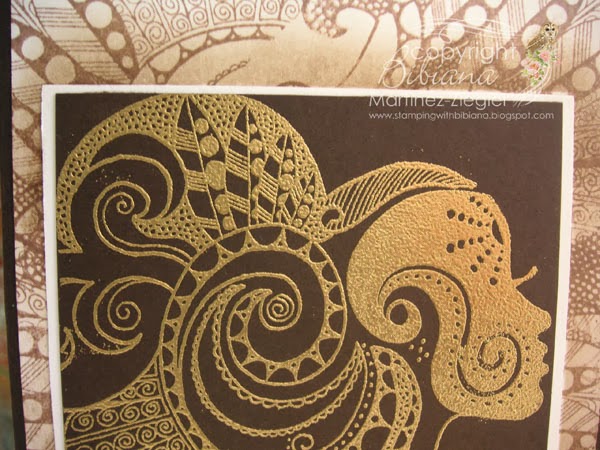 The month of February,  Month of Black History,  coincides as well with the celebration here in the USA of the birthday of President Abraham Lincoln, (who with his Emancipation Proclamation, abolished slavery In USA) and of Frederick Douglass (born as a slave and scape at 20, became a renowned anti-slavery activist)
Schools and communities nationwide organize celebrations to acknowledge Black history!

My small and very humble participation to these events is with this card, which not only celebrates Black Month History that coincided with the BAFTA awards (British Academy of Film and Television Arts), where the movie "12 Years of slavery" won for best movie of the year!...

but with President's Day
[which we are celebrating now here in The US.  Most school are off  this entire week, called as well as 'winter break', which falls every year on the 3rd Monday in February, and celebrates the birthdays of American Presidents George Washington and Abraham Lincoln]


So my card salutes all these 3 events !


Sending you lots of wishes for Peace and Love! 
This is an interesting play on different uses of the same stamp, "Moon Goddess" by Lost Coast Designs … two 5-1/2 cards (one stamped in blue, one in brown), plus a tag and an ATC.  The cards use the full stamp, while the stamp wraps around to the back of the tag and only a partial cut-out is used for the ATC.  Double  click on photos to open a larger image viewing.  Instructions are posted below the four photos.  Enjoy  & have a GREAT day!  Cherri Robb     http://angelsandpears.wordpress.com/ 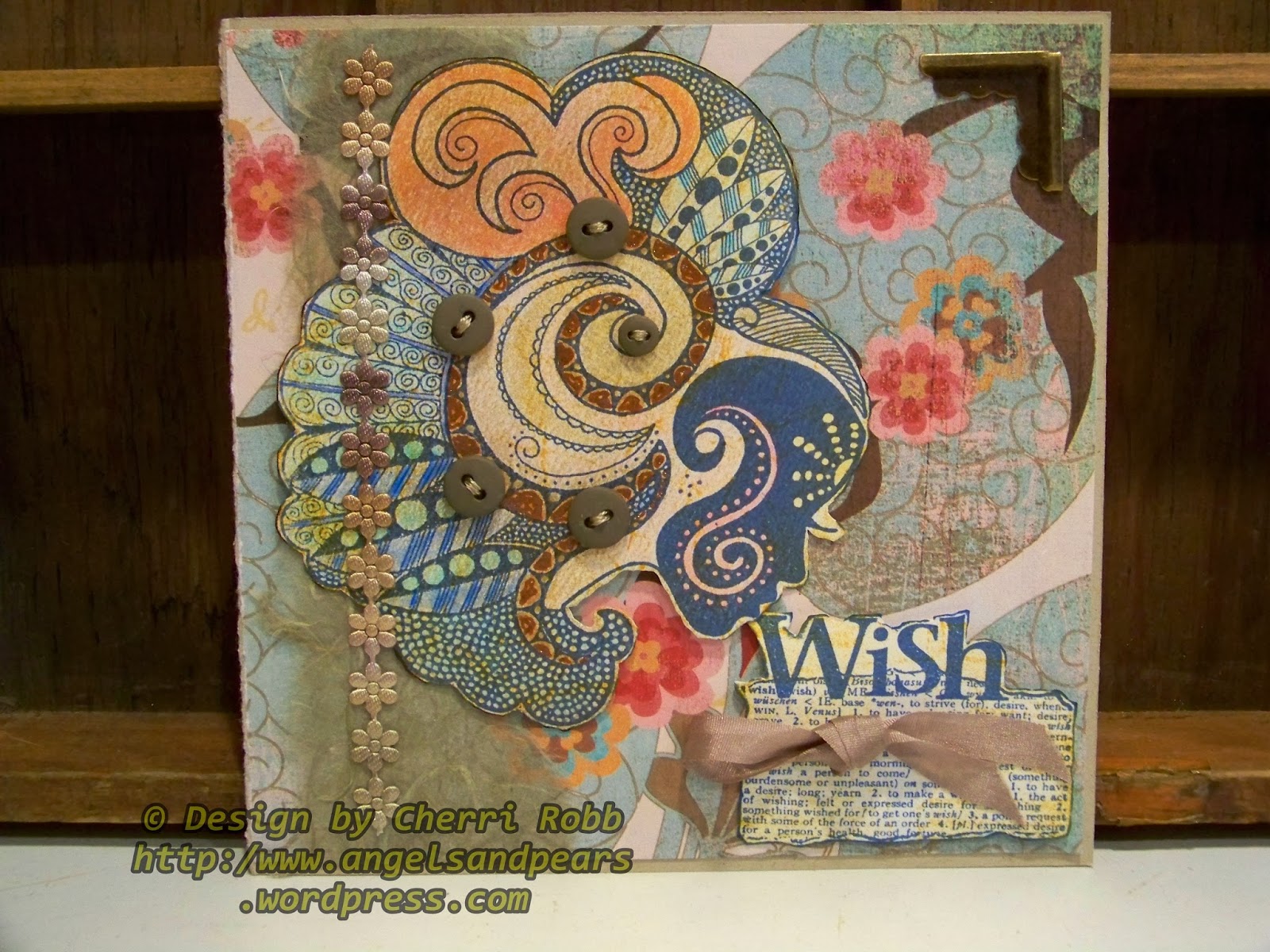 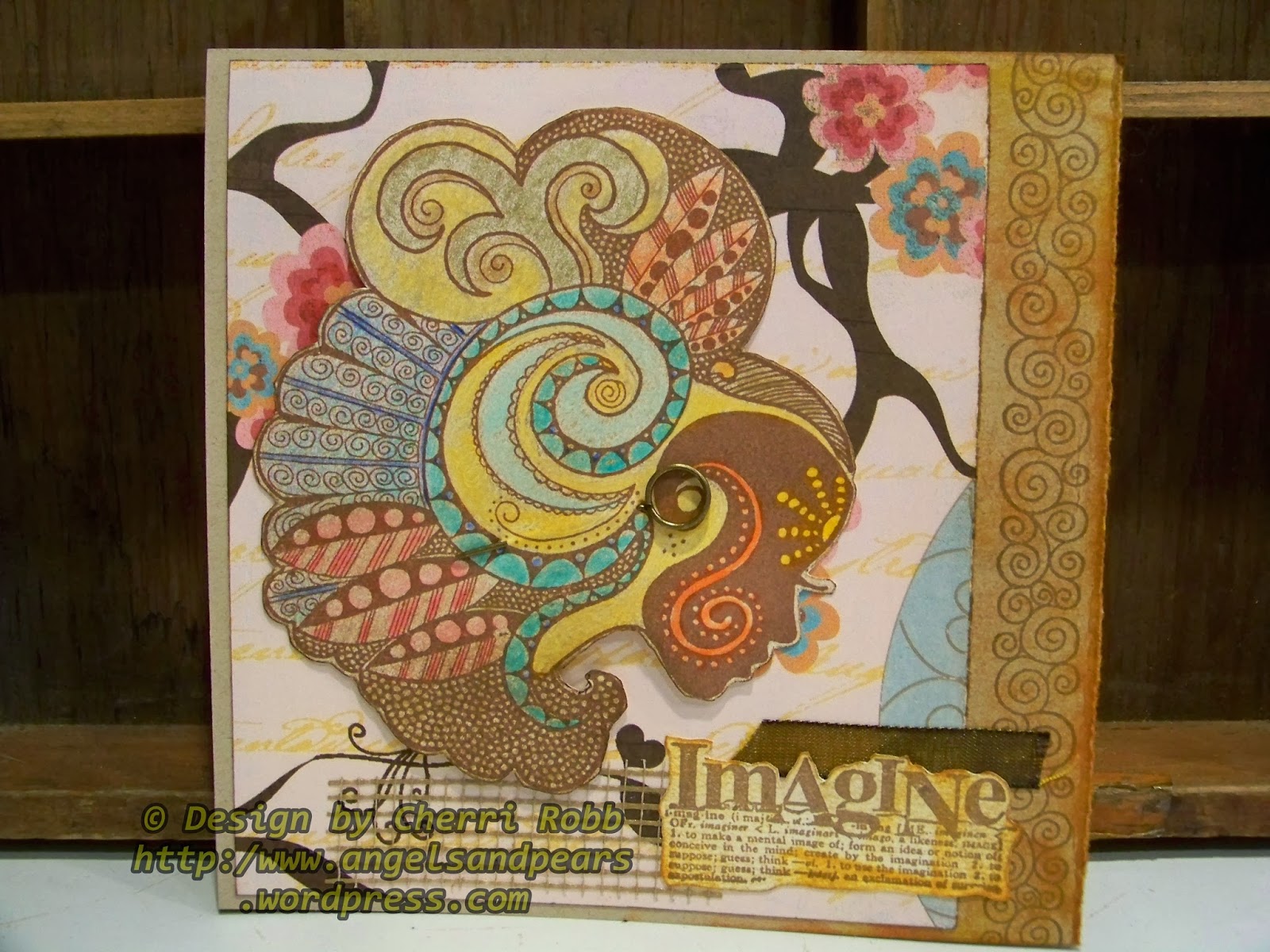 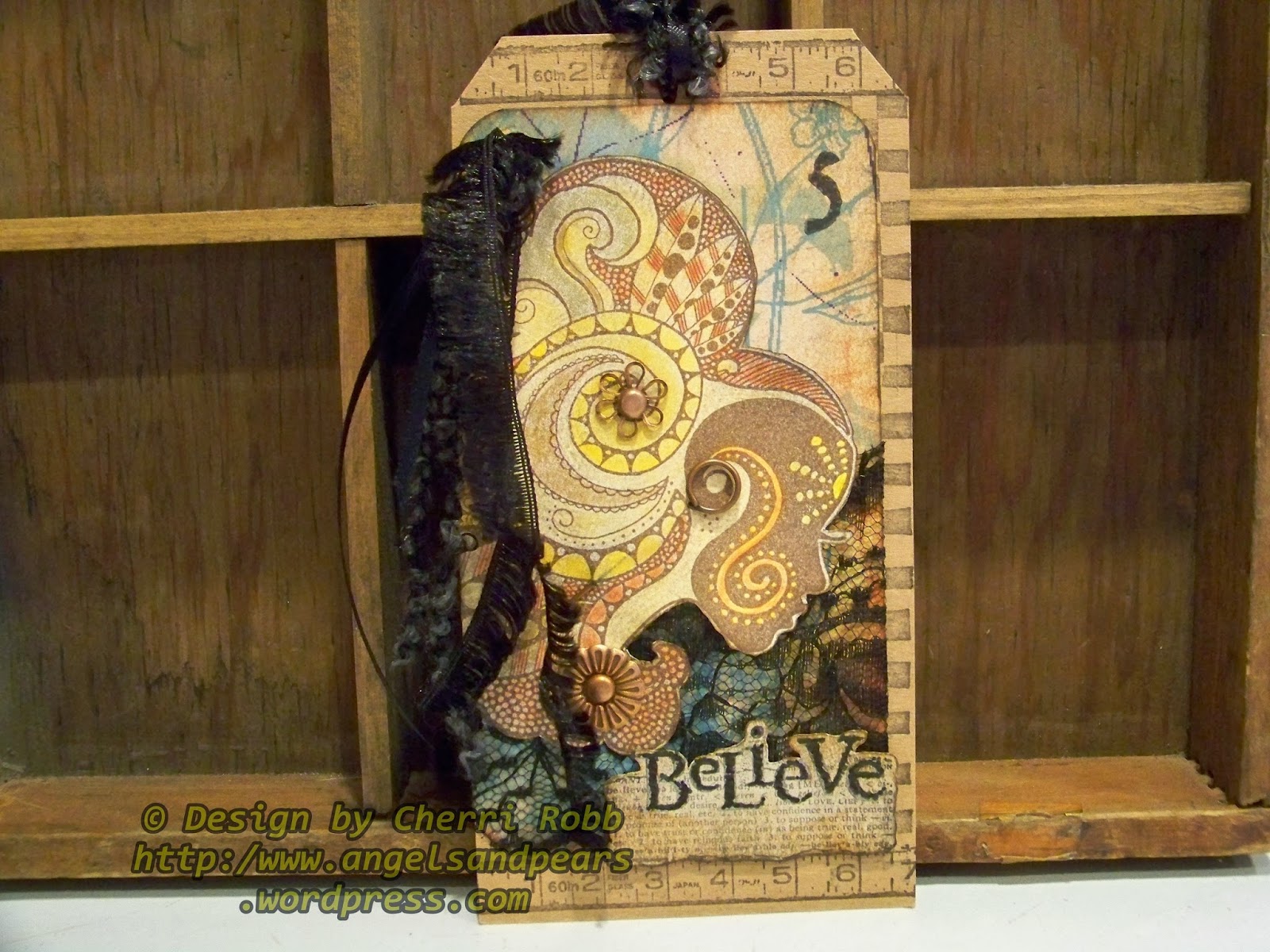 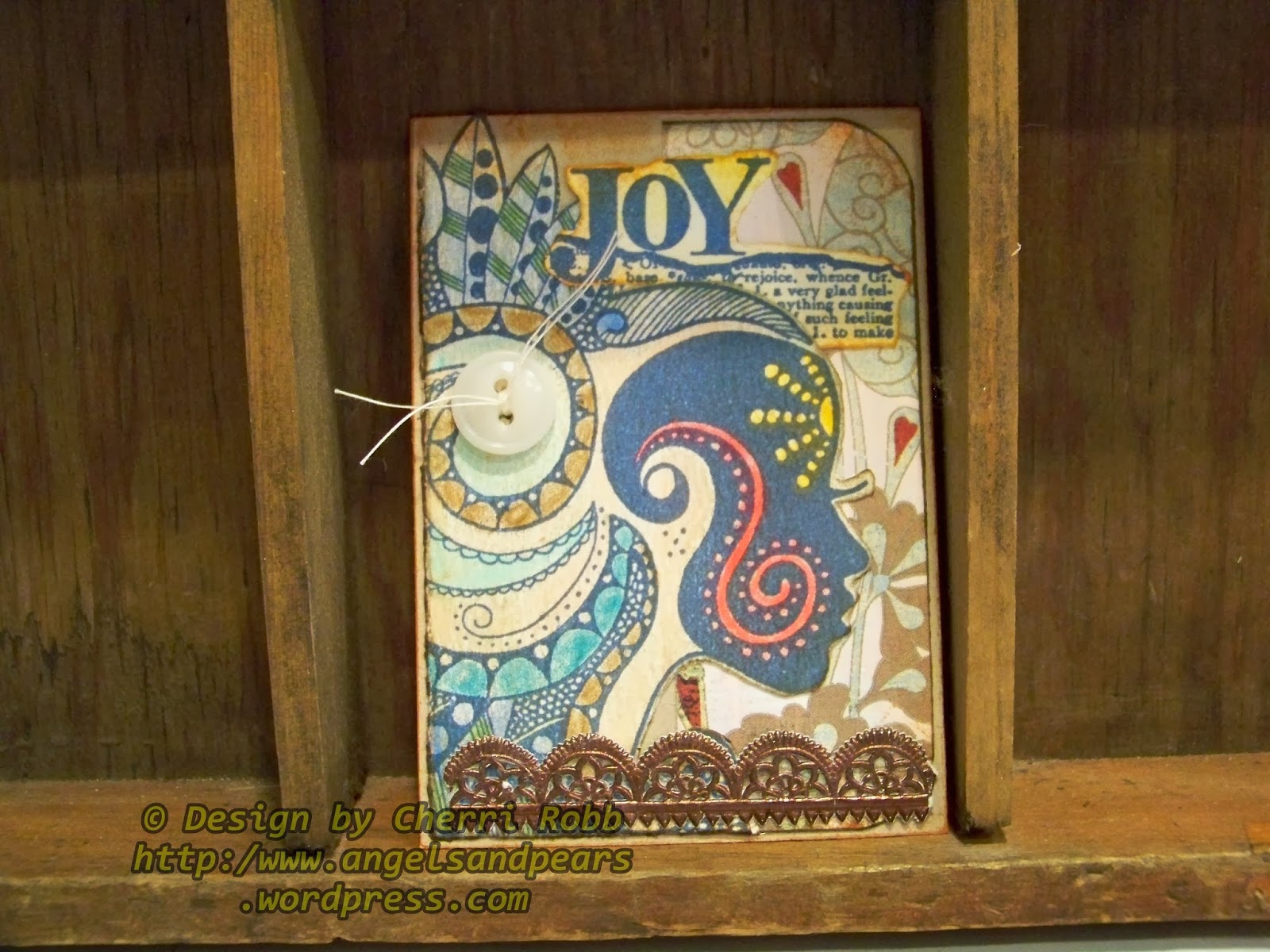 BLUE CARD INSTRUCTIONS:  I picked a stamp, then a piece of pretty paper.  I stamped the image in different ink colors (Momento Danube Blue and Rich Cocoa), trimmed 1/8 inch outside edge and laid onto the paper.  Using the blue stamped image, next I selected colored pencils to coordinate with the paper and pull out its flower and background colors.  I smudged over the pencil color with a light shade of Distress ink, then shaded edges more with a couple different colors. Sometimes I apply the ink pad directly onto to the artwork (lightly, or a somewhat dry ink pad).  I layered a strip of paper on top of card stock, added a corner brad, and then mounted to card stock.  Next I sewed on a few buttons and mounted Moon Goddess image on top of card stock with 3D glue dots.  I continued embellishing with a flower ribbon, a dictionary word stamp and a little ribbon bow.  Note how different the art looks when I repeated a similar process using the brown image (see second photo above).
###
No comments:

Some Bright fun on a Dreary Day!

Hello friends, like many of you we are getting buried in snow this week. A great way to spend a snowday is inside by the fire with a stamp in hand, add some tropical colors in the mix and it is paradise! Here is a fun techniques you can try with watercolors and your stamps, I used the fruit pod stamp from Lost Coast Designs:

Fun huh? I hope you try this and stay warm! Happy crafting!
No comments:

Hi Coasties!
Let's share a little love today!  I made a pretty Valentine using the Lost Coast Design stamp Flower Sisters. I stamped the image on glossy white CS and colored with Copics.   Isn't this a sweet image!??   This stamp would be great on a Mother's Day card too.  I added lots of romance to my card with lace, ribbons, and die cuts. 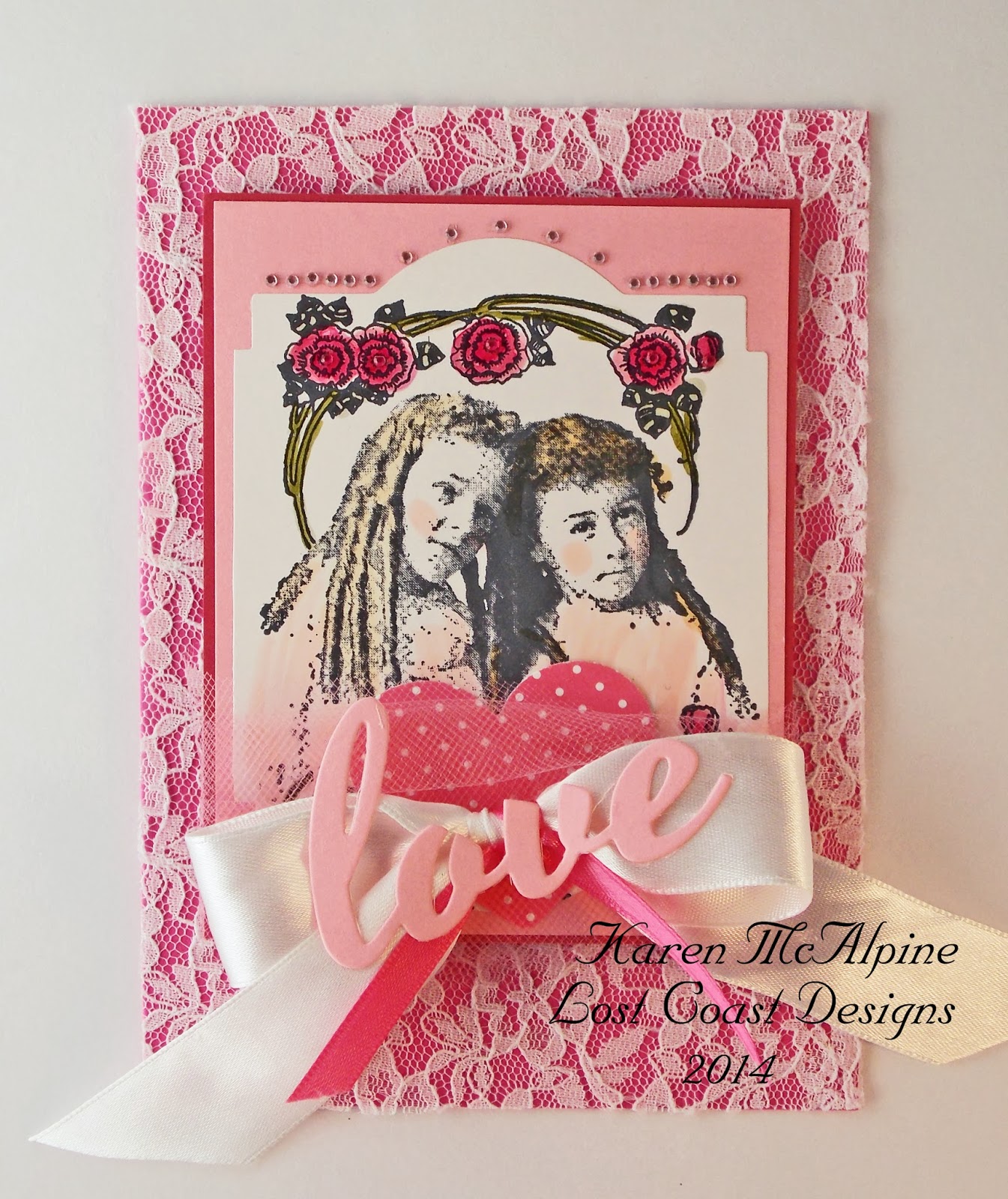 For more pics and instructions, check out the full post on my blog, Dreaming and Creating.  Happy Valentine's Day!!
Karen McAlpine
No comments: