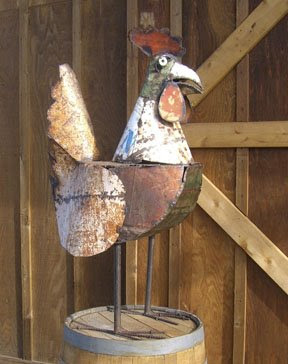 Chestnuts Roasting on a Open Fire....da-da-de-de-da...was the plan, so we harvested the chestnuts in the backyard using everyone's favorite harvesting tools, the rake and snow shovel. Had planned on a bounty of walnuts, too, but the squirrels left us only five nuts. 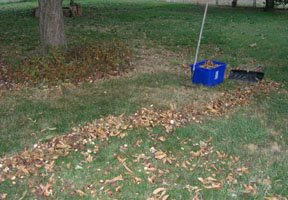 So I Googled "roasting chestnuts" and carfully followed directions to make an "X" in each so the steam could escape. It's too early for a fire, so we thought we were substituting "Chestnuts Roasting in Westinghouse", but it should have been "Chestnuts Exploding in a Westinghouse". 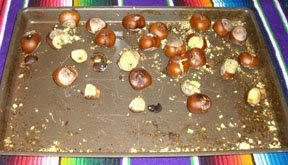 I guess I didn't make the "Xs" deep enough. Google had not been that specific. The rest of the inner bits will have to be scraped off the walls of the oven next time I have a Domestic Moment and want to bake something. With any luck, it will all have disintegrated by then. LOL

We're back from Art & Soul. It rained most of the weekend, so, aside from the show evening, we huddled in the Scotty and watched DVDs on my laptop. Cosmos picked out his spot. He doesn't get much blog time because he usually doesn't photograph as well as Batman -- in most pics he's just a big dark outline with glowing alien eyes -- so I'm glad to have something of him to post. What a pretty dog! 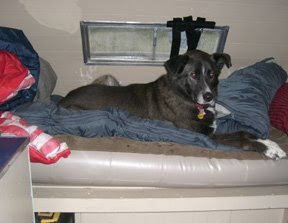 The wierd black stuff on the window behind Cos's head is duct tape and a towel to stop a drip -- and very successfully, I must say!
We usully drive conservatively because the car just gulps gas when pulling the Scotty, but on the way home a truck with the biggest pumpkin I've ever seen passed us. I was determined to get a pic of it, but he was going much faster than we, so for about 5 miles we had the poor Escape/Scotty both going faster than they'd ever gone...but success was ours! And fortunately, we didn't get caught!! LOL 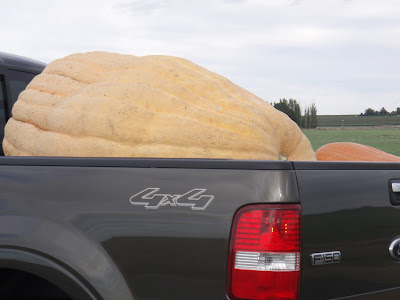 There was a last-minute cancelation at the Adventures in Stamping show outside Cleveland next weekend, so you Ohioans will be seeing me there on Saturday.

We're headed to Art & Soul in Portland tomorrow morning. It's a drive show, so everyone -- C and the boys -- are all going, and it's be a camping weekend. Creighton took time this week to get the Scotty ready for the trip. I thought he was going to do some refurbishing of the interior, but he had other plans. This is from yesterday, when he was about half through stripping the blue paint from the interior. 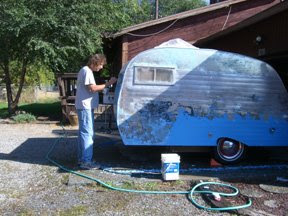 Not what I was expecting, but it's his project....and it all had to be done in 7-minute intervals to coincide with the vuncanizer cycles. LOL
Hope to see some of you Saturday night at the show.