Time for more Hawaii pics....Shrine with Rooster and Chicken. 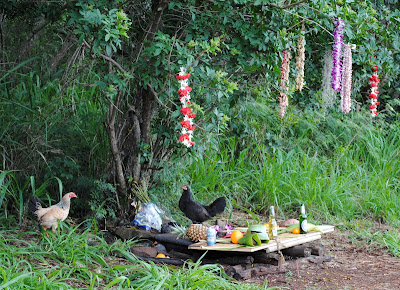 I've been to Collinsville and Orlando. Meanwhile, Cosmos has been back to the vet twice for happy days in the 1960's. Two more pins are out, and he's motoring around on 4 legs.

He still has the Bobble-Head action going on with the Cone Of Shame, but at least the front paw-hop is in the past. Now he is a bit of a "Peg Leg", unfortunately can't get him to balance a fake parrot on his back LOL. I think this means that there is no nerve damage, so we're all happy campers. Batman can almost get lost in the grass. Can't cut it until we have a couple of dry days, which hasn't happened for several weeks. Tomorrow was supposed to be Yard Day, but it's raining again tonight.
1 comment:

I got back from the West Springfield show late last night. I leave for Collinsville on Thursday, so my two days are pretty much unpacking, pressing, trimming, re-packing....and maybe some laundry.
I took Cosmos to the vet this morning so here's his update....
Some good news, and some questionable. The bones are fusing as hoped, but the vet is concerned because he's not moving the leg or foot at all, so there *could* be nerve damage. Don't know yet, so we're saving that panic for later. He has a new contraption....less pins and wrapping, but added a splint to hold his foot up....Oops, the splint is not in the pic. The vet must have really good drugs. 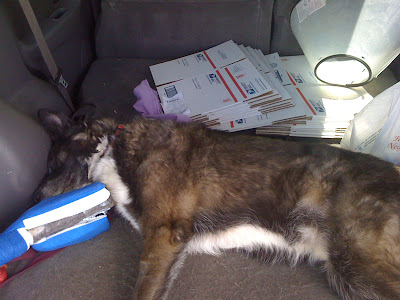 He had to be carried to the car, then carried inside, and has been like this for 6 hours. We're starting some therapy to move his leg....as soon as he wakes up LOL. Water therapy was recommended, but he so hates to even get his feet wet that I think the stress of getting in a pool (assuming that we can even get him in deep enough to be of value) would offset the benefit.
Thanks to everyone who is following the sage. Coz, I Creighton and the Batman all appreciate your Good Wishes and Healthful Thoughts. 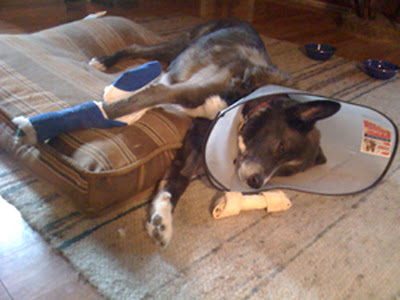 I'm in the Phoenix airport, headed for the W. Springfield show. No new pics of Cosmos, but here's one from the
Audubon Valley on Oahu. The weather was crap most of the week, and we had no money for excursions, but we took a walk through the park one afternoon to see the flowers and feed the mosquitos. 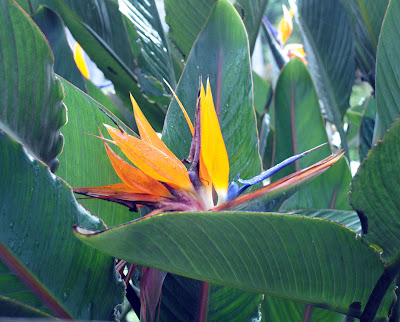 I'm disappointed that the pic is so washed-out looking. Hope it looks better on your monitor. Gotta run for a flight now, so no time to fuss with it. Original looks much better. :-(
Cosmos Update...we've passed the half-way point on his pins and clamps. Only three weeks more and hopefully we'll switch to a cast. He's doing great -- he's gotten used to swinging his leg around so he can lay down on his own, and he's hopping around the yard with no issues. I'd intended to post a video, but it's rained all week, and he hates getting his feet wet, so the trips outside have been short and to the point. I really wish we could take off the Elizabethan collar, but I think it bothers me more than Coz. He looks like a cross between a bobble-head doll and Marty Feldman in "Young Frankenstein". "Walk this way, master". LOL
No comments: