I've been on the road most of the last three weeks -- driving to GPS demos in Idaho, and Kennewick, Tacoma, and Bellingham in Washington, and flying to stamp shows in Phoenix, Detroit, Buffalo. I'd intended to do a travel monolog of my trials and tribulations. Priorities change. Sunday night a dear friend ended her long and courageous battle with cancer, and left the body that could no long fend off the disease. She left a husband and a son, and she is sorely missed by many. I like to think that she has continued her journey unemcumbered by a body that failed. We pray for many things -- a good parking place, a profitable business, a diet that works, popularity, love. The God that I believe in does not have time for these small things. We're responsible for them. My God is busy with the big stuff. I pray for my friend and for her family. I pray that she is in a place with no pain, and that she waits there for her loved ones, and that some day, some place, they will be united again, and that she will be there waiting for them.

I'm going to have a glass of wine and play a few tunes for her, and I hope she can hear them.

I will miss you, Eileen.

We were driving around and enjoying our last Saturday of garage-saleing yesterday, when Creighton spotted this vending machine. I've seen lots of wacky stuff in vending machines, but this one is the wierdest yet. I thought it had to be shared. 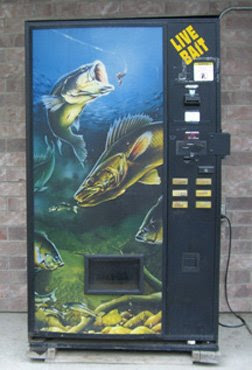 I found this wonderful cat pillow, which HAD to come home with me. Batman got pretty excited over the addition, but when the cat neither ran away or hissed at him, he eventually gave up on the one-sided confrontation. They're best buds now. LOL 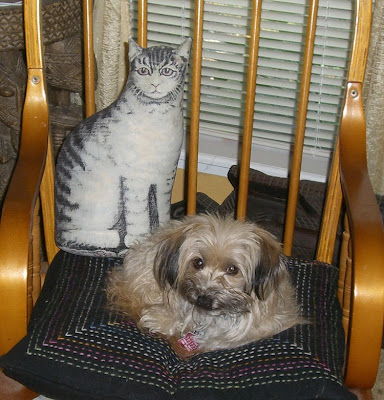 There's a baseball field about a mile from us, and when there's a Home game, they shoot off fireworks at the end of the evening. We heard them start last night, and since it's my last weekend home for a while, we rushed out and drove to where we could see the fireworks. I got out quickly, but C was eating dinner, and was about 10 seconds behind me. Well, when we got home, Batman was nowhere to be found. I called and called, and finally decided he'd snuck out during that 10-second break, so out we went wandering the neighborhood looking for him. Long story short, we found Batman hiding upstairs under the bed with Creighton's pilfered container of cottage cheese. He'd snagged it off the table while we were gone, got the lid off about half way up the stairs, and was much too usy eating when we called him.